Take a moment and reflect on what you're about to be doing; picture yourself describing this to your coworkers or family. We aren't going to cover official safety rules here, we're assuming you've read them and you understand them. Read them now  if you haven't, and if there's something you don't understand about them find a marshal to explain. What we're trying to impress on you is that thrown weapons is literally playing with knives (or axes, etc.)
The most important thing overall in throwing technique is consistency. As a beginner you have to train your body to hold the weapon, throw it, and release it the same way every time at the same distance in order to predict your results. Sound boring? Well if you think of all the variables you can't control, you'll appreciate these consistencies. Beginners achieve consistent throw quickly - consistent release is the hard part. In its most basic form the release is merely opening your hand with your wrist straight at the end of the swing to allow the weapon to clear. There are throwers who flick their wrists when they release, claiming it adds extra momentum or snap to the throw. This may be true, but it's hard to be consistent with every throw until you learn to control the snap. We teach without snapping because most people would get frustrated and give up before they learned the required control. For beginners snapping or flicking the wrist is a no-no.
The only "must" with your stance is to face the target squarely. Where archers stand sideways to the target, throwers face the target straight on. After that it's mostly how you were taught or personal preference.
Below you'll see some of the more common methods marshals use to teach a beginner using a "standard" tomahawk first, then other weapons. Read one method with axes all the way through first before skipping to the knife section. Also be aware there are other ways than what you see here, but like everything else in life there is no one way to do something correctly.

Step 1:
Approach the target with ax in hand and rest the blade on the face of the target. Hold the ax so the end of the handle is flush with the bottom of your fist. 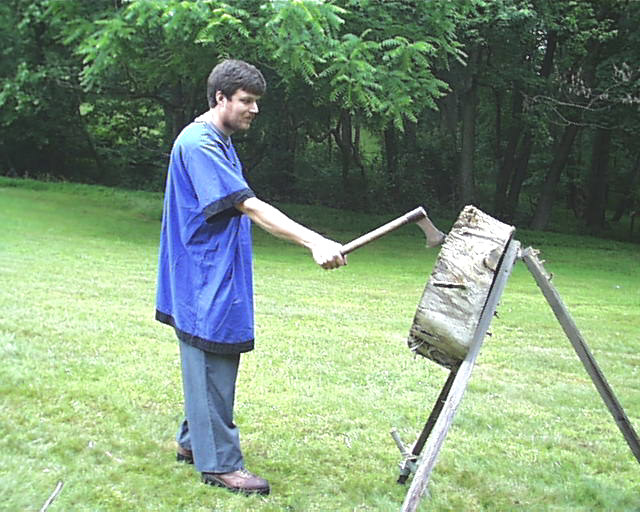 Step 2:
Adjust distance so your back is straight, wrist is square (note how Phil's forearm is 90 degrees from the ax handle) and proper reach is achieved while the blade still rests on the target face. 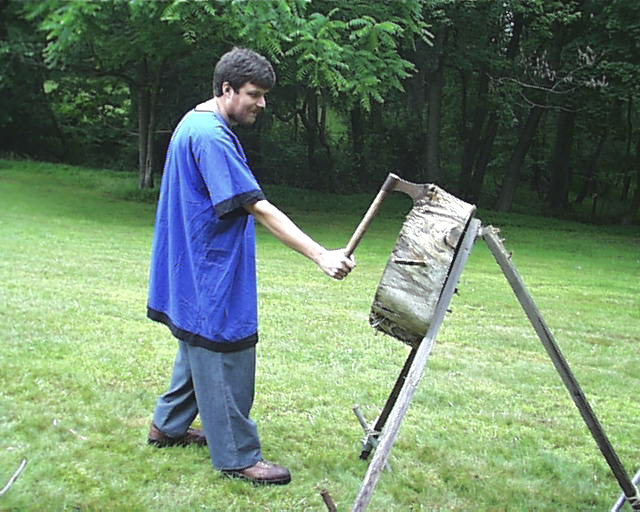 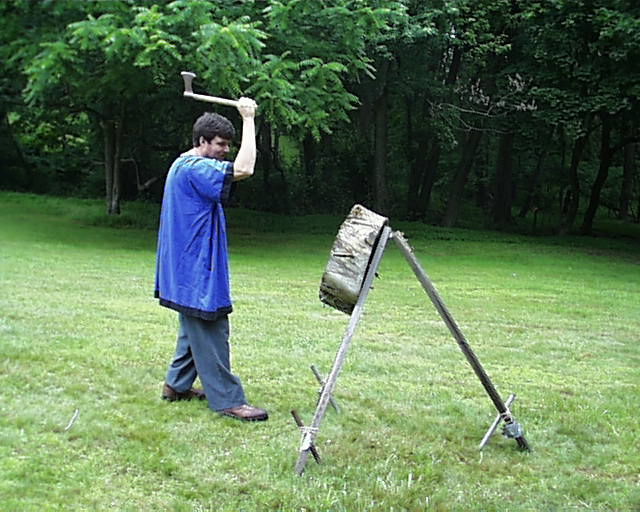 Step 4:
Swing the ax down into the target face with enough force to stick it in the target. The motion is very similar to hammering a nail into a wall. The handle of the ax should be parallel to the target face and pointing straight to the ground (six o'clock.) Note the elevation of your arm, and how extended it is from your body (your elbow should be bent just enough so it's not locked out straight.) When you are throwing from the proper distance this is where your arm has to be when you release the ax. In these pictures the target is too short for the release to be shown correctly here.
Worry the ax out of the target face and repeat steps 3 and 4 until you are confident you know how it feels to swing hard enough to stick the ax. With this method your throwing arm should be the only part of your body in motion. Now step back from the target to the proper distance for one rotation (about twelve feet using a "standard" tomahawk) and assume the proper stance for throwing. The only difference now is you release the ax when your arm is in the correct position (hammering a nail in a wall.) 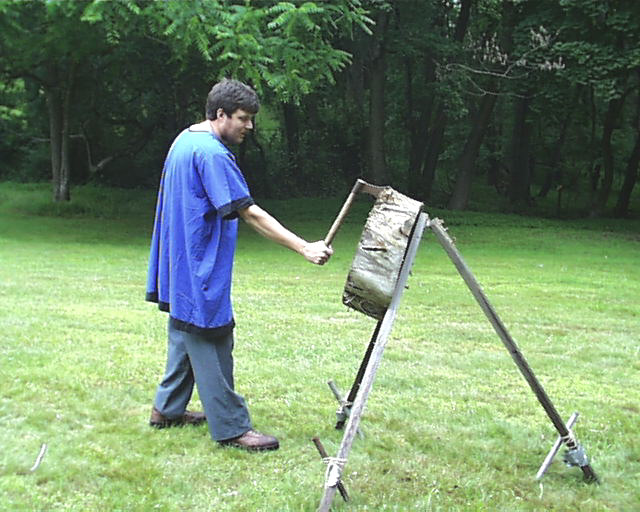 The Step Method:
Although less variables makes the weapon easier to control some people prefer to step when throwing, it seems to put all the pieces together into a rhythm. Use the same technique as Phil's No-Throw Method except a step is worked into the throw. Throwing at longer distances may require a step also, to gain momentum for the weapon (see Multiple Rotations in Advanced Throwing Technique.)

Knives:
Now that you've learned how to get an ax to stick, lets talk about knives. Most of what was shown above carries directly over into knife throwing, so much of it will not be repeated. If something is unclear, reviewing the ax discussions will help. As stated in Types of Weapons a beginner should use the heaviest knife they can handle. A heavier knife is more forgiving of an improper throw, and is less likely to change its flight path on a windy day.
Since knives have been bashed so bad until now, here are some positive things:

The most popular image for knife throwing is our hero holding his knife by the blade. This is done, but will be covered in Advanced Throwing Technique. For now we'll start with holding it by the handle. Apply the same technique for knives as you did for ax throwing (with or without a step) and note that a lighter weapon will rotate faster than a heavy one so you'll probably want to start on the ten foot line (the closest you can be to the target in the East Kingdom of the SCA.) There are two ways to hold your wrist when throwing by the handle. The first way is to keep your wrist straight as you did for axes (the knife does 1 1/4 rotations at the ten foot line.) The second way is to lock your wrist out all the way so the blade is pointing at the target at release (the knife does 1 full rotation.) Keeping the wrist straight with knives can be difficult (you may either snap the wrist or not maintain the 90 degree angle) so locking the wrist out prevents this from happening.  See the picture below showing both grips. 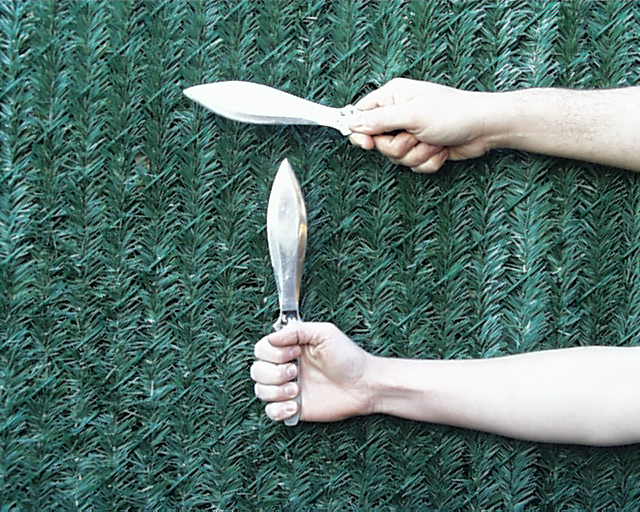 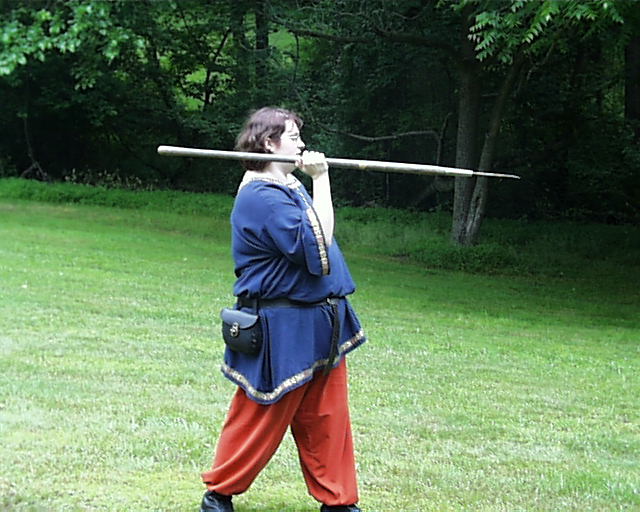 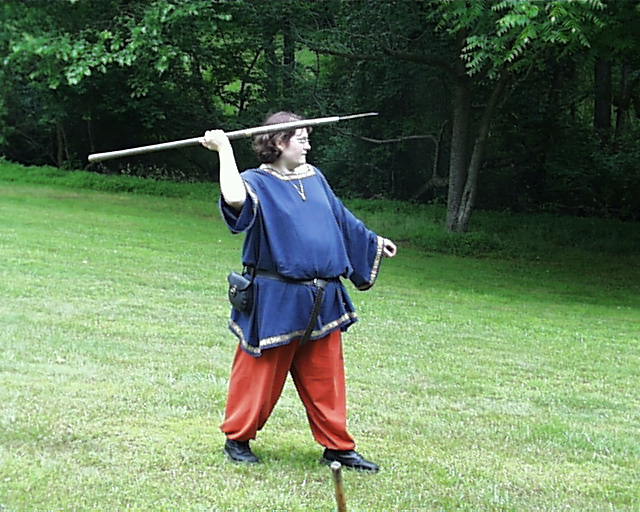 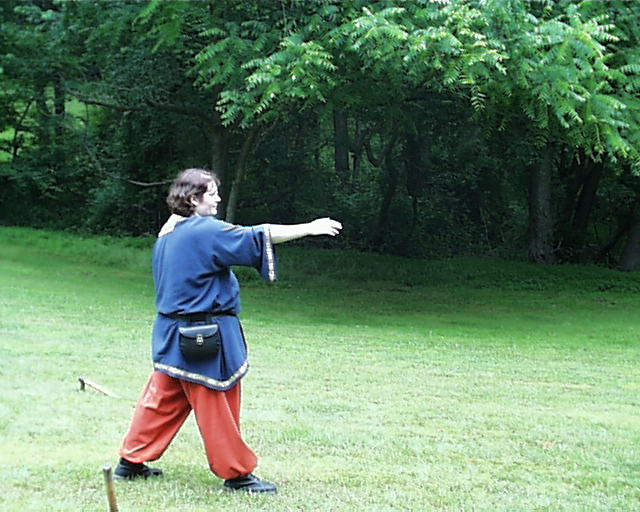 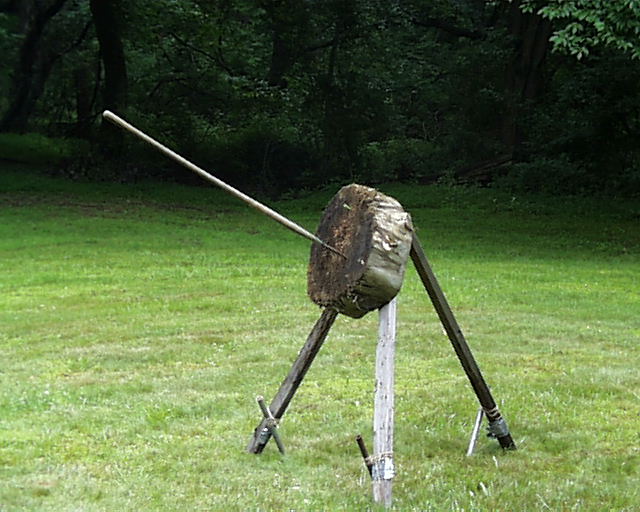 Javelin throwers from high school and college do this differently, but they are the "first timers" with the most experience we get at the range. By all means watch how they throw a spear, and never be afraid to ask them to show you how they do it and why. 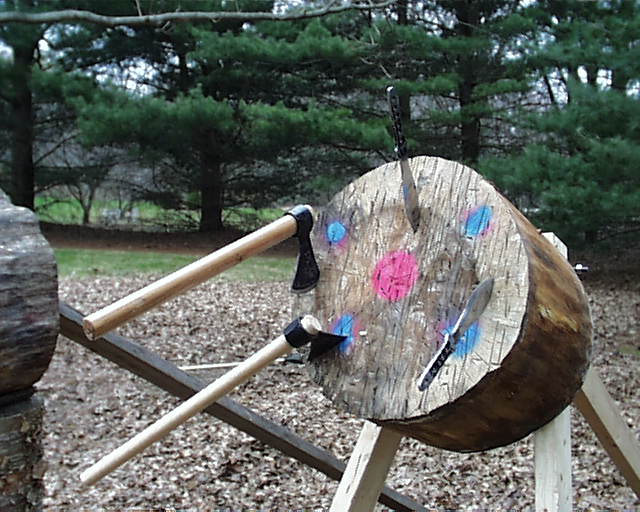 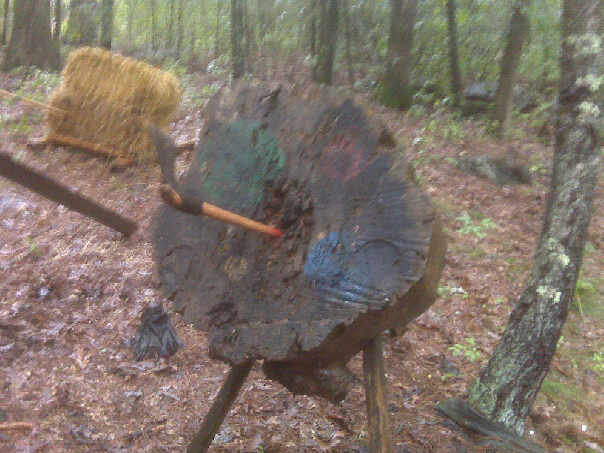 This is a french hawk that stuck in the center of the target. "Excellent, job well done," you may say. Then you realize it's stuck by the handle. The wood handle, no less. I have two theories:
Judging by the condition of the target in the picture I'll go with the former.


Now that you've seen some of the ways to throw, go find a marshal and play. After some practice (one good afternoon of throwing could do it) you'll notice you can tell at the actual moment of release whether or not the weapon will stick. When you can do that: congratulations! You've just reached a milestone in thrown weapons. You have accomplished the basic skills needed to do any other kind of throwing. Minimal practice will maintain that level of ability, but the next new thrower will also meet that in an afternoon. Hopefully we have you hooked on this now, and you'll push your abilities on your own.